Rheumatoid arthritis (RA) is considered as an autoimmune disease that leads to chronic inflammation of the joints and other parts of the body due to an overreaction of the body’s own immune system resulting in the attack of healthy tissues. Despite the significant improvement in therapeutic management by using biologic disease-modifying drugs, true long-term remission rarely occurs, and the disease progresses, leading ultimately to joint dysfunction and disability.
It is assumed that RA is a progressive disease starting long before the appearance of symptoms. This indicates the existence of a therapeutic window of opportunity which is the short period of time for initiation of efficacious therapeutic intervention, very early in the course of RA.

The greatest genetic risk of RA constitutes the HLA-DRB1 alleles of the major histocompatibility complex molecules (MHC). Environmental factors, such as smoking and infections are considered to play an important role, as well as diet. During the development of RA, individuals are still asymptomatic in clinical terms, but present systemic autoimmunity, reflected by the appearance of RA-associated autoantibodies in their sera. The next phases are associated with signs and symptoms of joint-centered inflammation followed by non-specific manifestations such as joint pain (arthralgia) and morning stiffness. Subclinical inflammation of synovium and bone marrow can also be detected. The last two phases are associated with the signs and symptoms of an illness (arthritis) defined as undifferentiated arthritis. Early screening for anti-citrullinated protein antibodies (ACPA)may identify individuals at risk and close the therapeutic window. (1)

Food as a major trigger for RA

These facts document an ongoing systemic inflammatory process before the clinical manifestation of RA. The question to be asked is: What could be the cause for this inflammation? The implication of food in other auto-immune diseases like celiac disease, Hashimoto thyroiditis, psoriasis, Lupus erythematosus removes any doubt that food may represent one of these causes, certainly not the only one, but an important one, as we eat every day and often this same kind of foods. (2) If this food induces an inflammatory response it will do so continuously. Some authors also speculate it could be the fatty acids, that promote inflammation, but much more important are foods triggering immune responses due to the presence of specific IgG antibodies. Jolanta Grygielska, et al (3) reviewed 200 papers dealing with RA and nutrition. The conclusion was sobering: There are no specific recommendations related to rheumatic diseases for a diet that would facilitate treatment. In other words: there is a need for a more individualized diet in RA. Anti-citrullinated protein antibodies (ACPA) are a polymorph family of antibody with numerous cross-reactions (4). An increase of ACPA could also be an indication of food specific cross reactivity. In a model of collagen-induced arthritis, Jianjie Li (5) shows that IgG auto-immune antibodies involved in the pathogenesis of RA have significant cross-reactions to milk and egg-proteins. Regular consumption of these food items could significantly contribute to the persistence of chronic inflammation and ongoing RA. Hvatum et al (6) suggested that the food related problems might reflect an adverse additive effect of multiple modest hypersensitivity reactions. 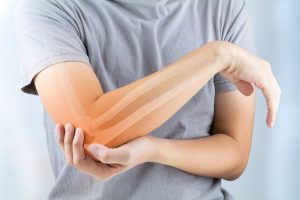 Unfortunately, published intervention studies are still scarce. In a double blinded placebo-controlled study, Gamlin (7) showed that a rigorous elimination diet improved up to 40% of the patients symptoms of RA. Some even discontinued drug treatments. In the paper of Panush (8) it is shown that elimination of dairy improved the clinical outcome while blinded provocation with cow’s milk completely reinstated the disease within 24-48hours. This is not surprising as 70% of the western population has high levels of IgG antibodies to cow’s milk. In two observation studies carried out in our lab, we saw an average of 50% improvement of symptoms in 62 RA patients and in another observation study (9) reports 41% improvement in 83 cases based on IgG positive elimination diets. Although it became clear that not only cow’s milk and eggs were a determinant, but can vary individually to include other foods contributing to the development of RA symptoms.

Systematic screening for IgG food sensitivities could help to individually identify potential trigger foods in auto-immune diseases and in particular RA. Particularly when these trigger foods are detected in the early phase of the disease. An elimination diet could stop or at least significantly slow down the progression of auto-immune diseases and RA. The benefit of such an elimination diets have been seen in the decrease of ANA in Lupus patients,
Anti-TPO in Hashimoto patients (see case report), and an increase of FEV1 in asthma patients.